Going Under for the Good of the Nation

by Jill Herron, Cromwell Journalist
​This country’s previous leaders didn’t bother much with community consultation or environmental impact assessments back in the 1980’s. It seemed that if the government had a plan they fired up the bulldozer and people were told to get out the way.
​
Even complying with what was much less-onerous legal consent requirements wasn’t really on the radar for Sir Rob Muldoon’s bolshie National Party when it came to building the Clyde Dam.

The project was the flagship undertaking of the ambitious and controversial ‘Think Big’ projects. It and a few others have proved successes energy-wise but as a whole ‘Think Big’ was much aligned as creating unmanageable debt, destroying landscapes and over-investing public money.

CLYDE DAM PROJECT FACT FILE
From 1968 onward the series of announcements that led to the eventual creation of Lake Dunstan, left residents of Cromwell and surrounding rural areas awash with shock and heartbreak.  Over 2000ha including farmland, 17 orchards, homes and even the main streets were set to go under.

Landowners rallied and successfully took the government to task for not acquiring the proper water consents but Muldoon’s men soon enacted legislative manoeuvres to smooth the way forward.

As serious construction work got underway, most opposed and saddened by the project gradually accepted they had no choice but to face the inevitable.  Others buoyed by the prospect of gaining a scenic recreational asset and tourism-magnet in the form of Lake Dunstan, began planning for an exciting new future.

​During the peak of over a decade of construction, the Cromwell Gorge was a swirling dust bowl of activity as 1000 workers remodelled the gorge, carting mountains of dirt on oversized dump trucks and drilling deep into the hillsides.

Many lived in ‘dam houses’ trucked to Cromwell by the dozen. They worked hard all week long then let off steam come Saturday night at the Golden Gate Hotel (nicknamed at the time ‘The Golden Gloves’) and Victoria Arms Tavern.

A government information centre in Cromwell was fire-bombed in a late-night attack during the early stages of the project, newspapers reported. No-one was arrested but the incident was said to be symbolic of the anger that continued to simmer just below the surface among environmental groups and some residents.

The late Noel Kennedy, high school headmaster, journalist and long-time Cromwell resident, reflected on the period in the Otago Daily Times in 1993.
​
“Once marker pegs appeared in the gorge people began to take notice and the quiet township began to change. There was quite a bit of bad blood in the early days, trouble in the pubs with the young hot-blooded fellows, that sort of thing.  It was grim for a while I can tell you.”

​Work progressed and the staged lake fill began in the early 1990s.  It inched up and up for over a year, stopping and starting in response to instability in the gorge at the Cairnmuir slip.  Tens of millions (some say over $400M) of unbudgeted dollars had to be spent on stabilisation and drainage work.  Much of this related to investigations late in the piece, that had confirmed the presence of active geological faults.  Crumbly schist at the dam site itself had earlier necessitated far more rock removal than anticipated and a costly earthquake-proof slip-joint also had to be added to the dam.

Determined to put a positive spin on events, The Cromwell Promotion Group let off fireworks while people danced in the rain at a ‘Plug-in Party’ when filling started in the autumn of 1992. The same day, downstream a bit from those wistfully etching their names into a soon-to-be submerged slab of concrete, a small group from Clyde launched a coffin into the river to acknowledge its ‘death’.
​
Filling continued as the Ministry of Works and Development, joint-venture contractors Zublin-Willamson and ECNZ pushed on to get the monstrous project finished. Goldminers seized final opportunities to check the old timers hadn’t left anything behind and parties were held to farewell disappearing bridges.

Fireworks and a fighter plane were rustled up by the Cromwell Promotion Group for a ‘Bridge Busters’ gathering at the old Cromwell Bridge as the waters rose to 185m. Then chairman, the late Michael Paardekooper, told reporters the party marked the significance of Cromwell finally having a lake that was accessible to recreational users.
As the final fill neared in mid-1993 a log was seen floating down the lake with about 20 rabbits on board. Their burrows in some tailings had flooded and a passing piece of driftwood had become a life-raft of sorts.
Doubtless those tenacious bunnies did not enjoy their ride but the people of Cromwell were now more than keen to get out on that water and have some fun.

In 1987 Canadian academic Rainer Jackson concluded in a study of water-oriented recreation on Lake Dunstan, that Cromwell had a positive future as a domestic tourism centre. He was right about that.

He recommended basic facilities such as ramps and toilets be built at points around the lake and much of this work was completed. Local authorities later joined the push for lakeside enhancement, funded by Electricorp.  Thousands of young trout were released and native and exotic plantings went in to beautify the gorge… but already there was trouble brewing below the surface.

Professor Jackson also rightly predicted in 1987 that silt was going to be an issue in the Kawarau Arm and in June 1993, a concerned boatie reported clumps of lagarasiphon one metre wide drifting down the Clutha River into Lake Dunstan.
​
A draft lakeweed management plan was opened up for submissions by the Otago Regional Council but alas, the weed continued to float in, put down its roots and grow. 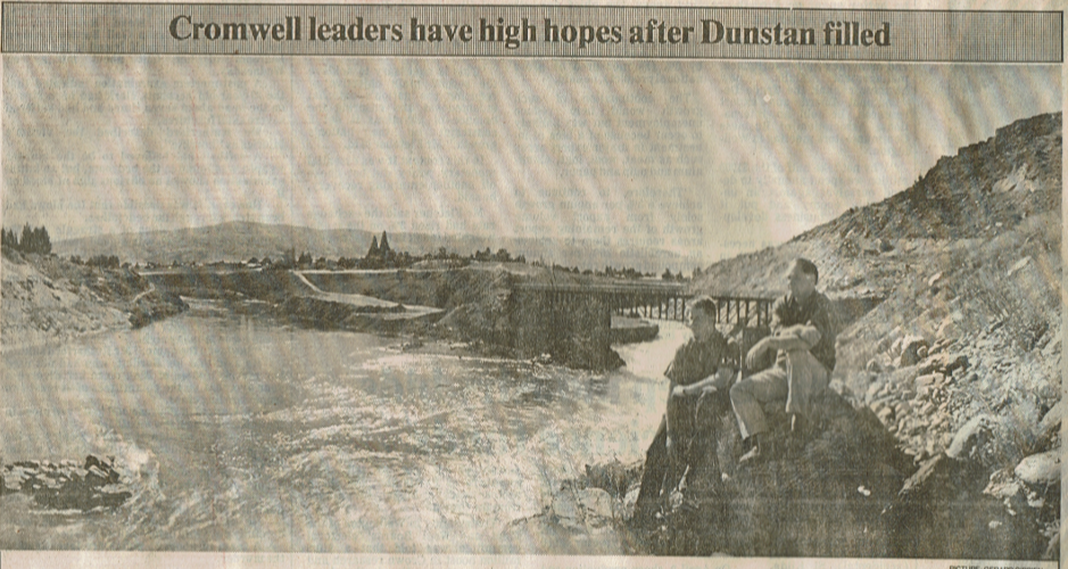 ​Everyone seemed to get a bit distracted after that and the focus turned to sorting out Cromwell township itself. Bits of work were done to mitigate weed and develop the shore, in dispersed by prolonged periods of disjointed inaction.

The Lake Dunstan Charitable Trust believe it’s high time for everyone to work together. Those with legal obligations for caring for various aspects of the lake now need to action these fully.

It’s time for the community to give some real input on what they want and for a long-term plan that allows modern, thoughtful lakeside enhancement, with a constant eye to the future.
​
We want the next chapter in the history of Lake Dunstan to reflect a period of upping our game and getting it right for the community and the environment.